Into the world with a rolling pin 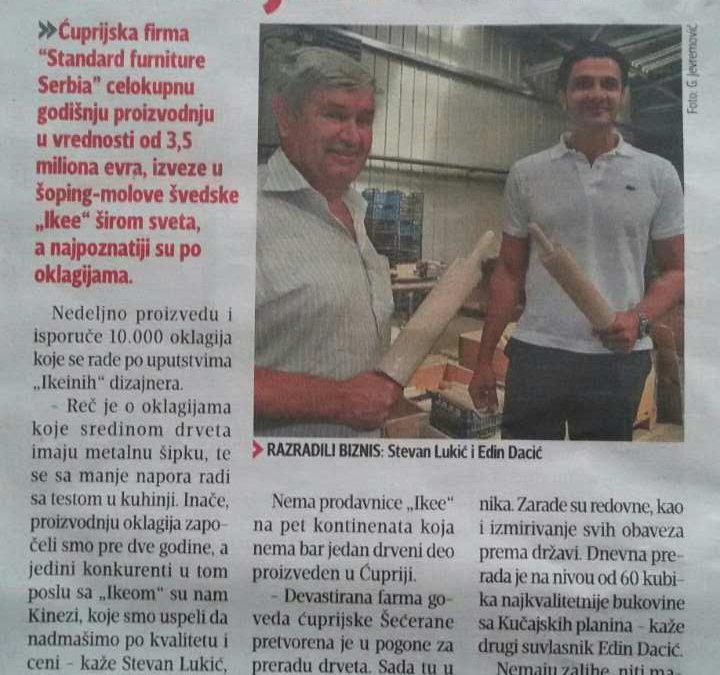 The company from Ćuprija “Standard Furniture Serbia“ exports the entire annual production, valued 3.5 million euros, to the shopping malls of the Swedish company “Ikea“ all over the world, and they are the most famous for their rolling pins.

They manufacture and deliver 10000 rolling pins per week, done according to the instructions from the Ikea designers.
– Those are the rolling pins that have a metal bar across the middle, so it takes less effort to deal with dough in the kitchen. We started the rolling pin production two years ago, and the only competitors in that business with Ikea were the Chinese, who we managed to surpass when it comes to both quality and price – says Stevan Lukić, the co-owner of the company.
There is not a single Ikea shop on five continents that does not have at least one wooden part manufactured in Ćuprija.
The devastated stock farm of the sugar refinery in Ćuprija was turned into wood processing plants. Nowadays, 220 workers work there in several halls. The earnings are regular, and the obligations towards the state are discharged properly. Daily processing is at the level of 60 m3 of the top-quality beech tree from the Kučaj mountains – says the second co-owner, Edin Dacić.
They do not have supplies nor the storage of ready-made goods, because everything they manufacture is delivered weekly, and the payment is done within 30 days. Except for the help from SIEPA in the amount of 135 000 euros, there was no other help from the state, and as they say, the Chamber of Commerce and Industry of Serbia does not even know they exist.